Indian Bank offers numerous types of debit cards for their customers to choose from. The debit cards offered by the bank comes with a host of benefits and is available in RuPay and MasterCard variants. Indian Bank also offers a debit card specially designed for senior citizens. 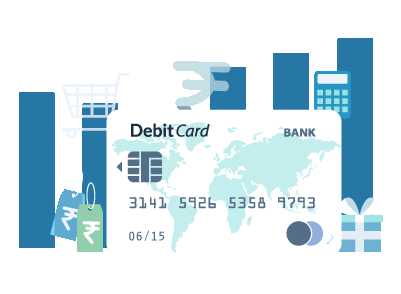 Indian Bank was established in the year 1907 during the Swadeshi movement. One of the largest public sector banks in India, Indian bank has a vast footprint with over 2400 branches in India. With branches on Jaffna, Colombo and Singapore, Indian Bank has a strong presence in over 69 countries with 213 correspondent banks. A forerunner in specialized banking services, Indian Bank has exclusive branches for dealing with foreign transactions and SME operations. The bank offers an array of financial and banking services including loans, deposits and accounts and debit cards.

Indian Bank debit cards are carefully designed to offer the maximum benefits and convenience for the customers. Debit Cards offered by Indian Bank can be used for ATM withdrawal, online shopping and utility bill payments.

Established in the year 1907, Indian Bank till date is one of the largest public sector banks in the country. Not just in India, Indian Bank has its presence in over 69 countries, with 2,600 branches. With regard to ATM cards, all the ATM cards issued by Indian Bank are tied up with MasterCard and Rupay card.

The Pradhan Mantri Jan-Dhan Yojana was launched on August 15, 2014, in a bid to include even those from the backward classes in the country in the financial system. The government launched the Jan Dhan zero-balance savings accounts and granted all that joined the scheme Rupay PMJDY debit cards - to facilitate cashless transactions.

Making sure that they cater to all sections of society, the Indian Bank rolled out the Senior Citizen card. The senior citizen card comes with the photograph of the individual as well as the blood group - in case of an emergency, amongst the other benefits that this debit card has for senior citizens.

Moving forward with technology, Indian Bank too has rolled out the EMV World Mastercard to enhance the security of their customers. EMV debit and credit cards come with a chip embedded in it, thereby protecting the encoded data of the card, unlike the magnetic strip in most cards. By doing so, it has made counterfeiting cards almost impossible.

Features and benefits of the Indian Bank EMV World Mastercard:

To avail an Indian Bank debit card, you must hold a savings or current account with Indian Bank. For the eligibility criteria for savings and current accounts offered by Indian bank, do enquire with the nearest branch.

A customer might be asked to submit the following documents for Indian bank debit card.