Difference between NRE and NRO Accounts 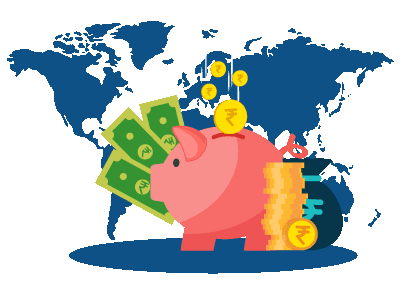 Managing one’s income is a crucial matter which must be dealt with utmost care and knowledge. However, when it comes to NRIs or Non-resident Indians, managing their income may be a little more complex. It often happens that an NRI may be earning income not only in the country they are residing but also in India in form of rent, pension, dividends, etc. Keeping them in mind, banks offer specialized deposit accounts which are NRE (Non-resident External) Accounts and NRO (Non-resident Ordinary) Accounts. Both these types of accounts are designed keeping the special financial needs of NRIs in mind and help them manage their income earned abroad as well as in India. There are several leading banks, public as well as private, like SBI, ICICI, HDFC, Kotak Mahindra, etc., which offer this facility of NRE and NRO Accounts.

An NRE Savings Account opened in India will allow the account holder to safely and conveniently deposit funds that come from foreign earnings / transferred foreign earnings to India. All funds coming into an NRE Account, whichever currency they may be in, are converted into INR or Indian currency, hence allowing an NRI to maintain foreign currency earnings in Indian Rupees. The funds collected as well as the interest earned on NRE accounts is exempt from tax and account holders can repatriate the money any time.

An NRO Savings Account opened in India serves the purpose of allowing NRIs to manage their income earned in India from sources like rent, pension, dividends, etc., while they are abroad. NRO account holders can also transfer foreign currency into an NRO account, which will be converted to Indian Rupees or INR. It is important to know that an NRO Account is not exempt from tax laws. Though it may only be opened by NRIs, an individual may also convert their existing resident savings account to an NRO account, when their residential status changes. So, a when I resident becomes an NRI, they have the option of converting their existing savings account held with a certain bank in India to an NRO account.

Both NRE and NRO Savings Accounts, though similar in many aspects, do have some major differences. In order to better understand the function and working of both these accounts, here is a low down about some major factors which distinguish an NRE Account from an NRO Account.

In simpler terms, repatriation means the inflow or outflow of currency to a foreign country. In this regard, NRE and NRO Savings account differ to some extent. One can conveniently repatriate funds, including the interest earned, from an NRE Savings Account. However, the RBI has imposed certain restrictions regarding repatriation from NRO Accounts. NRO Savings Account holders may only be allowed to remit up to USD 1 million during one financial year i.e. April to March.

It is likely that interest rates offered on NRE and NRO Accounts may differ with different banks offering that facility. However, currently, most banks are offering rather similar rates of interest on both these accounts.

One of the major differences between NRE and NRO Savings Accounts could be the taxation laws which are applicable on each. NRE accounts are exempted from tax. Not only is the income but also the interest earned on these accounts is tax exempted. Hence, taxes like income tax, wealth tax, gift tax, etc., are not applicable in India.

However, following the Indian Income Tax Laws, NRO Accounts are not exempt from tax. Taxes like income tax, wealth tax, gift tax, etc., are applicable to NRO Accounts. Also, interest earned on an NRO Account is taxable as well. NRO Account holders, do, however, have the reduced tax benefit which they may avail under the Double Taxation Avoidance Agreement (DTAA).

Deposit or withdrawal of funds is also one of the more important factors differentiating an NRE Account from an NRO Account. Funds originating from a foreign country (foreign currency) can be deposited in both NRE and NRO accounts. However, funds originating in India i.e. in Indian Rupees or INR can be deposited only in NRO Accounts and not an NRE Account. Withdrawals, however, can only be made in Indian Rupees or INR from both NRE and NRO Accounts.

Choosing the right account which best addresses one’s financial needs can make a world of a difference. Keeping in mind the differences which define an NRE Account from an NRO account, it would help if you can evaluate your requirements before choosing between any of these two accounts. However, since both these accounts have been designed after giving due consideration of an NRIs financial needs, they will undoubtedly offer a convenient and secure solution to help manage funds from across the globe.

Page 1 of 3 1 2 3
Tools
Resources
reTH65gcmBgCJ7k
This Page is BLOCKED as it is using Iframes.