State wise list of Axis IFSC code, MICR code and addresses of all branches in India

Locate any details of Axis branch in India. 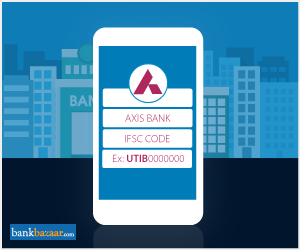 All branches of Axis Bank has their own unique IFSC (Indian Financial System Code). This code is required by individuals to perform any kind of online transaction through NEFT, RTGS, IMPS, and internet banking. The code is set by country’s premier bank namely ‘Reserve Bank of India’ to every bank that operates in the country.

There is no denying the fact that online cash transaction has been a blessing to the world of banking as it facilitates clients to wire money and make disbursements electronically. Making payments electronically using facilities like NEFT (National Electronic Funds Transfer), RTGS (Real Time Gross Settlement), and Immediate Payment Service (IMPS) has made life easier for all.

These payment systems have been introduced by the RBI. To ensure that the process involved in transferring money from one account to another is a smooth process, the bank has issued the unique 11-digit code to all bank branches that participates in the NEFT network. The code which can be divided into three parts helps in identifying the source bank as well as the destination bank. The first four characters which forms the first part of the the code represent the name of the bank, the second part consisting of the fifth character ‘0’ is for future reference, while the third part consisting of the last six characters of the code denotes the Axis Bank branch code.

Here, we have compiled a list of a couple of branches of Axis bank that functions in Bangalore (Urban):

How to Search for Axis Bank IFSC Codes and MICR Codes?

Axis Bank IFSC Codes are printed on cheque leafs issued by the bank to its customers. Customers can also get the IFSC and MICR codes from the official bank website, third-party financial websites or a comparison website for financial products and services.

BankBazaar is one such comparison website that enables individuals to get detailed information related to IFSC and MICR codes for Axis Bank on its web portal. To check the details, the individual needs to visit the main page of BankBazaar and scroll down to the bottom where they can spot the Bank IFSC Code link. Once the link is clicked on, the individual is redirected to a new page where four dropdowns can be accessed. There the individual has to choose the specific bank, state, district and the regional branch to find the IFSC code or MICR Codes.

Working based on Deferred Net Settlement, NEFT transactions are handled in batches at explicit times set by Axis Bank. The NEFT fund settlements are done from 9 AM to 7 PM from Monday to Friday and as five batches from 9 AM to 1 PM on Saturdays (except on second Saturdays). Axis Bank does not have any minimum or upper limit for money transactions using NEFT. The cash will be credited to the recipient on the same day or on the next working day.

Real Time Gross Settlement System (RTGS) offers real time money transactions to Axis Bank clients. The settlement of cash is usually done by taking one instruction at a time. Yet this is one of the quickest modes of transfers existing today. The least amount that has to be transferred through RTGS is INR 2 lacs. Also, the bank does not inflict any upper limit. Once the funds have been received by the receiver’s bank, the money will be credited to the concerned account within a few hours.

Axis Bank offers two processes through which customers can make interbank fund transfers to any bank account in India. These facilities are available under the Fund Transfer Banking section of the Axis Bank website. Any Axis Bank customer can transact cash to any beneficiary across the country using NEFT and RTGS transfers. All RTGS and NEFT transfers can be done on secure platforms, as per the RBI guidelines.

Now you can transact money between two accounts across multiple banks from the comfort of your home or office. The following modes makes it possible.

Immediate Payment Service (IMPS), as the name suggests, is a prompt interbank electronic money transfer means. It can be accessed any time, day or night, from your home, thereby avoiding the hassle of going to bank and standing in long queues. Clienteles can send and receive money via IMPS be making use of their Mobile number submitted at the bank and the unique Mobile Money Identifier (MMID) given by the bank.

Other ways of handling fund transfers are Internet Banking using the beneficiary’s account number and IFSC code of his/ her bank branch. Apart from instant crediting, it requires little documentation and can be performed from any place with an internet connection.

Instant Money Transfer is a ground-breaking cash remittance service that lets you transfer funds to a beneficiary only by using his registered mobile phone number. The beneficiary can take out cash from any Axis Bank ATM with or without swiping a credit/ debit card. The receiver get all the info needed for withdrawal on his/ her phone.

The significance of IMT is manifold as it can be utilized if the receiver prefer to avail cash, requires money urgently or does not even have his/ her own bank account. This method is also useful when you don’t know the other party’s bank account number or if the recipient is not within easy reach.

To send cash, all you need to do is to register your recipient’s account information via Axis Bank Internet Banking. And your work is done. How? Log in to your Axis Bank Net Banking Account. Click on ‘Payments’ and then select ‘Transfer Funds’. You can register the receiver's account number and other info via ‘Add Beneficiary’ option. It will take up to eight hours to activate this. Once it is activated, select the concerned Beneficiary and select ‘Begin Payment’. That’s all there is to it. You also have a 'Pay Standard (NEFT)' option. Do you have numerous accounts linked together? No fuss. Simply pick the specific account and do the same process.

Axis Bank fund transferring service is also endowed with Visa enabled services to suitably settle bills of a Visa Credit Card of any bank. You can also use this to send money to another account by using your Visa Debit Card number.

The Visa Money Transfer facility shall be retrieved online too. Go to the bank webpage and log in to i-Connect. Using this you can pay bills as well as track the process. Visa Money Transfer is totally dependent on the time taken by the Recipient's bank to carry out the payment. Usually it takes around up to four days to take the payment forward.

While making a NEFT or RTGS transaction with Axis Bank, customers need to provide the below information:

Axis Bank, came into effect in 1994 as a UTI Bank. In the span of 22 years of exemplary service in the field of banking, the bank has witnessed a remarkable progression. It is indeed commendable that it has achieved the stature of ‘the country’s third largest private lender’ in terms of assets (following ICICI and HDFC Bank) beating those banks with generations of legacy. Offering a host of financial products, facilities and services like loans, insurances and swift money transfer choices, Axis bank has always emphasized on the importance of customization while adopting a ‘never-fear-to-take-risk’ attitude. If you take a look at their campaigns, they were always empowering and unconventional. As a bank ahead of the current flow, it caters to people from diverse backgrounds and nobody has anything out-of-sync to say about the bank’s service quality and comprehensibility.

Other Products from Axis Bank
Other Popular Banks IFSC Code: