State wise list of Bank Of Baroda IFSC code, MICR code and addresses of all branches in India

Locate any details of Bank Of Baroda branch in India. 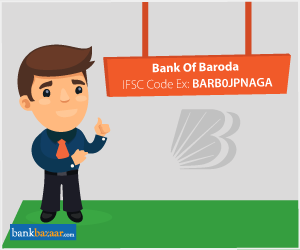 IFSC codes have been allotted to all the branches of banks in India to easily identify transactions done through a particular branch. IFSC codes are alphanumeric, 11-digit codes, which are unique to a single branch and do not ever repeat. Cash transactions can be performed to a specific branch by compulsorily entering IFSC codes or MICR codes. These codes also helps users ensure that the transferred funds go to the right person, without any hassles.

Given below is an example of a Bank of Baroda IFSC code:

“BARB0CALICU” - IFSC Code for a Baroda Bank branch in Calicut, Kerala. The above can be used for online funds transactions via NEFT, RTGS and IMPS to any Baroda Bank account.

The Reserve Bank of India has assigned IFSC codes to all banks in India to identify branches when fund transfers are made. The use of an IFSC code is mandatory while making interbank transfers like NEFT and RTGS across any bank in India. Online money transfers can be made without any confusions using IFSC codes and MICR codes. The first four letters in an IFSC code indicate the name of the bank and the last six numbers help identify the beneficiary’s branch. The zero in the middle is a control character and is reserved for future use. IFSC codes help eliminate the risk factor while making money transactions and make sure that the funds reach the right recipient at the right branch.

Get your Credit Score FREE in less than 3 minutes! Get it NOW

How to Search for Bank of Baroda (BOB) IFSC Code and MICR Code?

IFSC codes and MICR codes can be easily procured if the bank’s full name and the branch is known. Users can conveniently find MICR codes and IFSC codes printed on cheque books/ leaves issued by Bank of Baroda. The Reserve Bank of India site also offers the complete list of IFSC codes required for customers. Apart from the bank’s official website, the other sources available for getting IFSC codes are either third party financial websites or fiscal comparison websites.

BankBazaar, which is a popular financial comparison site, gives a comprehensive table carrying IFSC codes for Bank of Baroda’s branches within India. Any user visiting the BankBazaar website has to select the Bank IFSC code link present at the bottom of the main page. Customers clicking on this link will be taken to a second page carrying four dropdowns. Customers have to enter certain details like state, bank, branch and district in order to get IFSC codes or MICR codes for Bank of Baroda. The generated table also contains the phone number, address of the branch, name, branch code etc.

How to Transfer Money using Bank of Baroda NEFT and RTGS?

Bank of Baroda customers can make fund transfers through NEFT or RTGS to any bank account in India.

Bank of Baroda does not levy any charge for a NEFT transfers and settles transaction as batches during weekdays and on Saturdays. The money will be sent to the beneficiary within the same day or by the next working day. NEFT transactions are done based on Deferred Net Settlements (DNS).

Real Time Gross Settlement System (RTGS) settlements are done on an individual basis by the bank. No charge is levied for RTGS transfers and customers have to make transfers as per the bank’s regulations. Funds can be transferred anywhere within India using this service.

While making a NEFT or RTGS transaction with Bank of Baroda, customers need to provide the below given information.

About Bank of Baroda (BOB):

Started in 1908 as a small financial enterprise, the Baroda Sun identified with the logo of Bank of Baroda has risen to be one of the leading international banking institutions. Bank of Baroda’s story of growth has been one with corporate vision, keen governance and financial prudence. Bank of Baroda has been a harbinger of social change, efficiently catering to their clientele with innovative solutions and always being a constant partner providing assistance for their different financial needs. Bank of Baroda now offers a wide range of products to its large customer base with exciting benefits and advantages. Bank of Baroda car loans are widely sought out by customers for their low charges, additional concessions and exciting discounts.

Other Products from Bank of Baroda
Other Popular Banks IFSC Code: