State wise list of IDBI IFSC code, MICR code and addresses of all branches in India

Locate any details of IDBI branch in India. 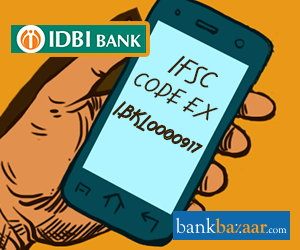 Every bank branch has a unique Indian Financial System Code (IFSC) that consists of 11 characters with both alphabets and numbers. This code is provided to every bank which participates in the NEFT network. The unique 11-alphanumeric code encompasses three parts. The first four characters are alphabets and represent the name of the bank which is followed by the digit ‘0’ that is there for future use. The final six characters are usually numbers and indicate a particular branch.

It needs to be mentioned that the way funds are being transferred from one account to another has changed dramatically since the introduction of Electronic funds transfer. The country’s apex banking institution namely the Reserve Bank of India (RBI) has introduced three methods of fund transfer which has been categorised as:

These methods make use of IFSC to ensure that there is no confusion when an individual transfers funds as well as to make the process involved a fast and completely safe one.

In this article, we have compiled a list of a few bank branches of IDBI bank that operates in Bangalore (Urban):


How to Search for IDBI IFSC and MICR Codes?

As long as an individual remembers the name of the bank and the branch, it is a simple task to find the IFSC and MICR codes of a particular bank branch. It can be found by making use of the World Wide Web or by visiting the website of the particular bank that is in question. Third-party financial websites such as BankBazaar can also be helpful in finding correct information in this regard. All the individual needs to do is to follow the steps mentioned below:

Transferring funds has never been easier with the introduction of NEFT, RTGS and IMPS services.

The NEFT or National Electronic Funds Transfers works on Deferred Net Settlements. The settlements are done in batches on an hourly schedule. As long as you have debited the amount within the time-frame that is stipulated by the bank, it will be credited to the beneficiary on the same day. If not, the amount will be credited on the following working day. You will need the following information to use NEFT service at IDBI:

Real Time Gross Settlement System (RTGS transfers funds on an individual basis which means that the clearance of funds are scheduled individually and not batchwise. RTGS is one of the quickest and safest ways to transfer funds. IDBI ensures that all the transactions will be completed on the same day that the customer debits the fund, unless it has been done after the indicated time frame.

You will need the following information to use RTGS service at IDBI:

The following are the charges for availing the RTGS service (for outward transactions) at IDBI:

Other Products from IDBI Bank
Other Popular Banks IFSC Code: