Locate any details of Union Bank branch in India.

IFSC codes have been allotted to all the branches of banks in India to easily identify transactions done through a particular branch. IFSC codes are alphanumeric, 11-digit codes, which are unique to a single branch and do not ever repeat. Money transfers can be done to a particular branch by compulsorily entering IFSC codes or MICR codes. These codes also helps users ensure that the transferred funds go to the right person, without any hassles.

The Reserve Bank of India has given different codes to all banks in the country and mandates their usage for all kinds of online money transactions. An IFSC code can be explained as carrying three different segments. The first four alphabets represent the name of the bank to which the code has been assigned. Then comes a zero which is generally a control character, left for future use. The next six digits of the code signify the specific branch of Union Bank of India and this is always unique. The last six digits change with every branch available.

Given below is an example of a Union Bank IFSC Code: 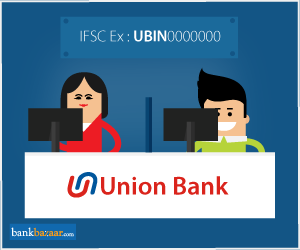 How to Search Union Bank IFSC and MICR Codes

IFSC codes and MICR codes can be easily procured if the bank’s full name and the branch area is known to you. Users can conveniently find MICR codes and IFSC codes printed on cheque books/ leaves issued by Union Bank of India. The Reserve Bank of India website also offers the complete list of IFSC codes required for customers. Apart from the bank’s official website, the other sources available for getting IFSC codes are either third party financial websites or fiscal comparison websites.

BankBazaar, which is a popular financial comparison site, gives a comprehensive table carrying IFSC codes for Union Bank’s branches within India. Any user visiting the BankBazaar website has to select the Bank IFSC code link present at the bottom of the main page. Customers clicking on this link will be taken to a second page carrying four dropdowns. Customers have to enter certain details like state, bank, branch and district in order to get IFSC codes or MICR codes for Union Bank of India. The generated table also contains the phone number, address of the branch, name, branch code etc.

Perfect Credit Card Deals for you

How to Transfer Money using Union Bank of India NEFT and RTGS?

National Electronic Funds Transfers (NEFT) are done in batches and have a specific timing within which the funds are settled by Union Bank of India. This process works on the basis of Deferred Net Settlements and is done on an hourly schedule. The money is credited to the beneficiary on the same day, if the batch clearance is within the stipulated time frame. Otherwise the money is credited on the next working day.

Real Time Gross Settlement System (RTGS) transfers are done on an individual transaction basis, i.e., the clearance of funds are schedules one by one. As per the standing instructions set, UOB settles RTGS transactions within the current working day. RTGS is one of the fastest modes of fund transfers available and can be performed on completely secure platforms.

For transaction amount ranging from INR 2 lacs to INR 5 lacs:

While making a NEFT or RTGS transaction with Union Bank of India, customers need to provide the below information:

About Union Bank of India:

Union Bank of India (UBI) is one of the premier banks owned by the Govt. of India (with 60.13 percent shares) and was established in the year 1919. Headquartered in Mumbai, financial capital of the country, it was officially inaugurated by Mahatma Gandhi in 1921. A popular banking brand in India, Union bank has a pan-India network of more than 4000 branches supported by around 6400 ATMs. Having achieved a significant name on the Forbes 2000 with a whopping asset of 13.45 billion USD, it has a strong international presence too. Union Bank has always played a pre-emptive role in country’s economic progression and continues to do so. It never failed to extend credit for the necessities of various segments of economy.