The goods that are sold through inter-state trade are subject to Central Sales Tax (CST) in India. However, all sale to foreign missions and SEZs should not be charged any CST. If any item is returned within 180 days, this tax will not be levied.

Note: Sales Tax has been replaced by the Goods and Services Tax (GST) starting 1 July 2017.

India is a democracy which is run by the people for the people, where the money to administer and develop the country also come from the people. Taxes are the primary source of income for the government and are used to maintain the nation. The government imposes different types of taxes on different products and services, in a bid to improve governance and improve infrastructure.

Central Sales Tax is an integral component of the tax structure of the country, having been introduced in the sixth Constitutional Amendment. Central Sales Tax has been a major source of revenue for the government since its inception and is considered crucial in Indian trade and commerce. 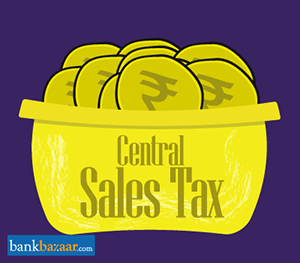 What is Central Sales Tax?

Central Sales tax refers to the tax levied on sales generated during inter-state trade and commerce in a country. In essence it is the tax one has to pay on the sale of goods which are sold through inter-state trade. Central Sales Tax (CST) is an indirect tax, origin based tax on customers and is payable in the state where a particular product is sold. CST is charged only on inter-state transactions and any transaction within a state or import/export of goods does not fall under its purview.

India, is a union of states and the strength of our country lies in its ability to handle these states collectively, which is where Central Sales Tax comes into play, by eliminating any confusion regarding inter-trade tax. Central Sales Tax came into existence through an act of the parliament and was enacted in the year 1956 to regulate sale of commodities and taxes regulating such sales. Although CST is levied by the Central Government and falls under the Union List of the Seventh Schedule, it is administered by the state in which a particular sale originates.

A trader dealing in goods which involve inter-state trade is expected to pay both the state sales tax and the central sales tax on such transactions.

Sales Tax in India falls under the ambit of Central Sales Tax Act, 1956, which extends to the whole of India and defines the rules and regulations guiding sales tax. This Act was introduced in the Sixth Constitutional Amendment and brought the taxes on sale/purchase of goods in inter-state trade under the purview of the legislative jurisdiction of Parliament. This act came into force in 1957 and forms the backbone for Central Sales Tax in India, containing various provisions for the same.

This Act mentions the definitions of inter-state trade, situations where CST is applicable, penalties involved, important goods for interstate trade, trade restrictions, appeals and any other information which might be relevant.

Central Sales Tax rates are determined by the government and have changed since the time the Act first came into force. The original Central Sales Tax rate was 1%, which was then increased periodically to 2% and finally became 4% from July 1975 onwards. Goods which are extremely important for inter-state travel are not taxed under certain provisions of the CST Act, ensuring that essential commodities do not become dearer.

In 2007, an amendment to central sales tax rates was accepted, which saw the Sales Tax coming down to 3% from the previously charged 4%.

June 2008 witnessed a further reduction in the tax rate, with the rate coming down to 2%. A major reason for the reduction in CST rates was the need to introduce Goods and Services Tax (GST), which would make CST inconsistent with GST.

The table below highlights the central sales tax rates for different scenarios.

There are certain rules which an individual participating in interstate trade is expected to adhere to. Some of the major rules are mentioned below.

How to get Central Sales Tax Registration?

Individuals wishing to register for Central Sales Tax need to furnish their TIN registration number . This TaxPayer Identification Number is the first step in the process, post which they are required to fill in the necessary forms and pay the registration fee for the same.

Individuals registering for CST need to furnish the following documents:

Note: The documents required may wary from state to state.

Central Sales Tax is exempted on certain occasions, some of which are mentioned below: