Advance tax is tax payable by individuals who have sources of income other than their salary. This is applicable to rent, capital gains from shares, fixed deposits, lottery winnings, etc. It can be paid online or through certain banks.
More

What is Advance Tax?

Advance tax is the tax payable on total income of the year earned from different sources including salary, business, profession, rent, etc. The tax is supposed to be paid before the end of the financial year.

Advance tax is also known as ‘Pay as you earn’ scheme. The tax is payable if your tax liability exceeds Rs.10,000 in a financial year.The tax should be paid in the same year in which the income was received.

Who has to Pay Advance Tax?

Listed below are some of the income sources which attract advance tax:

How to Pay Advance Tax? 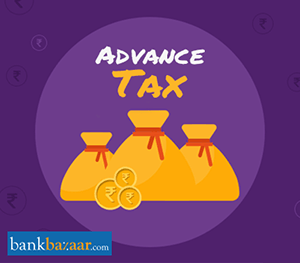 Advance tax can be paid through tax payment challans at bank branches which are authorised by the Income Tax department. It can be deposited in authorised banks such as ICICI Bank, Reserve bank of India, HDFC Bank, Syndicate Bank, Allahabad Bank, State Bank of India and more.

Another way of paying advance tax is by paying it online through the Income Tax department or the National Securities Depository.

An individual can calculate advance tax on their own and determine if they have to pay advance tax.

Listed below are the steps to calculate advance tax:

How to Pay Advance Tax Online?

The advance tax can be paid online through the online facility offered by the Income Tax department. Listed below are the steps that need to be followed to make a successful online payment for advance tax.

If an individual forgets to pay the advance tax by the first deadline, then the individual has to pay interest. The interest is computed as 1% interest on the defaulted amount for every month until the tax is paid off completely. The same interest penalty will be applicable if you don’t pay by the second or third deadline.

Senior citizens (people above 60 years of age) who do not own any business are exempted from paying advance tax. Also, taxpayers who opt for presumptive schemes are exempted from paying advance tax. These schemes can be applied for by people whose business turnover is more than Rs.2 crores in a financial year. In the year 2016-17, such scheme was extended to doctors, lawyers and architects, provided their annual receipts totals to a maximum of Rs.50 Lakhs.

Challan 280 allows people to pay their income tax online on the website of the Income Tax Department of India. On the website, people have to select this challan and fill the form and then use it to pay taxes online/office. If they want to pay the tax offline, they have to download Challan 280 form from the Income tax welcome, fill it and submit it at the bank.

At the end of the year, if the Income Tax Department finds out that you have paid more tax than you should have paid, then it will refund the excess amount. Taxpayers can claim refund by filling and submitting Form 30. They have to make the claim within a period of one year from the last year of the assessment year.

Listed below is the advance tax schedule for self employed and businessmen.

Advance Tax for Assessees (apart from the ones who are covered under section 44AD):

Advance Tax for Assessees who are covered under section 44AD: