Sales tax is always a percentage of a product’s value which is charged at the point of exchange or purchase and is indirect. The different kinds of sales tax are retail, manufacturers’, wholesale, use, and value added tax.

Note: Sales Tax has been replaced by the Goods and Services Tax (GST) starting 1 July 2017.

What is Sales Tax?

Trade has formed an integral part of world history, shaping the world into the form it is in today. It is hard to imagine a world without any trading, be it of goods or services. It was this desire to trade that led to countries embarking on voyages to find new trading partners, eventually changing the entire demography of Earth.

The world survives and thrives on trade and governments across the globe have found a way to use trade to fill their coffers. Sales Tax is a form of tax paid to a governing body for the sale of goods and services. Sales tax is an indirect tax and is generally charged at the point of purchase or exchange of certain taxable goods, charged as a percentage of the value of the product. The sales tax depends on the government in power and the individual policies enforced by it, generally being simple to calculate and collect. In simple terms, the sales tax is an additional amount of money paid while purchasing goods or services.

The concept of sales tax depends on the governing principles followed by governments, but there are some universal sales taxes applicable in most countries. The different types of sales taxes are mentioned below.

India has emerged as a sound democracy has achieved great economic progress compared to most countries. A major reason for the growth and development of the country can be attributed to the taxes collected by the Government. India follows the system of a central union government at the centre and state governments in each state, with each government choosing to follow a taxation policy to meet their demands.

The Central Sales Tax Act governs the taxation laws in the country, extending to the entire country and contains the rules and regulations related to sales tax. This Act allows the Central Government to collect sales tax on various products. The Central Sales Tax is payable in the state where the particular goods are sold.

The Central Sales Tax Act was formulated with the goal to make tax collection simpler and streamlined. The main objectives of CST Act are highlighted here.

Sale price refers to the amount payable to the dealer/trader in lieu of the goods sold. It includes the cost of packing, insurance charges (if any), incentives to attract buyers, and the sales tax paid by the dealer. It does not include cash discounts, installation costs, delivery costs and goods exchanged or returned by the buyer.

Inter-state sales refer to sales which lead to movement or transfer of goods from one state to another, achieved by transferring the title documents while the goods are being moved.

Example 1: If an individual in Karnataka sells goods to a person in Maharashtra.

Example 2: If Ramesh from Telangana delivers goods to Harish in Gujarat, who in turn sells it to Krishna in Bihar by transferring the documents of title during the transfer of goods from Telangana to Bihar.

All dealers need to follow certain guidelines and give declarations in prescribed forms to the buyer. Sales Tax authorities print and supply different forms for various purposes, each form being listed below. 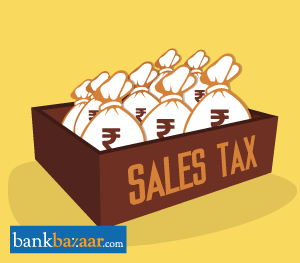 Individual State Governments have the power to levy sales tax to meet their financial requirements. The sales tax in different states vary for different products, with Value Added Taxes forming a big chunk of state income. It is for this reason that certain goods are cheaper in a particular state compared to another state. States categorize individuals associated with sale of goods into manufacturers, sellers and dealers, with each one needing certificates to work under the ambit of the law.

States offer tax emptions in certain cases, which can be humanitarian or to avoid double taxation.

Sales Tax might seem like a complicated term to a lot of people and a lot of us think that calculating it is extremely hard, if not impossible. It is however far from the truth, as calculating sales tax is no Herculean task if one gets the basics right.

Thus he pays a sales tax of Rs. 10 on the product.

There are a few points one needs to remember while calculating sales tax.

Taxes can sometimes be complicated and an individual might not necessarily realise when he/she violates any provisions of the laws. Here are some of the most common violations when it comes to sales tax.

Central Board of Direct Taxes:

The Central Board of Direct Taxes is an apex body which is in charge of administration of taxes in the country. It is a statutory authority and functions under the purview of the Central Board Revenue Act of 1963. It is a division of the Ministry of Finance, working under the ambit of the Department of Revenue.

Composition of Central Board of Direct Taxes:

The Central Board of Direct Taxes is composed of the following members.

The Central Board of Direct Taxes looks after all issues and matters relating to the levy and collection of direct taxes in the country.