Locate any details of Kotak Mahindra branch in India. 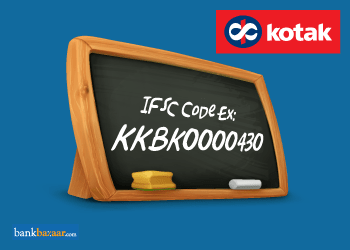 Since the introduction of electronic transfer of funds, it has become extremely easy for customers of banks in India to transfer funds safely and quickly. Kotak Bank has two options of transferring funds electronically; NEFT and RTGS services. RBI have introduced these services in almost all banks in India and they make use of IFSC codes. Each branch of every bank in India have a unique IFSC code which is used to identify the sender and receiver bank in the process of fund transfers. These codes have made transferring money faster, efficient and secure accurate. Further, the chances of fraud are also diminished due to the usage of these codes. The IFSC (Indian Financial System code) is an 11 character, alphanumeric code which contains three parts: The first 4 characters denote the name of the bank. In the example of Kotak Mahindra Bank, this would be KKBK. The fifth character is always zero since it is reserved for future use. The last 6 characters represent the specific branch.

If you visit BankBazaar, IFSC and MICR codes for almost every bank in India, including that of Kotak Mahindra Bank. These are the steps one needs to follow to acquire the IFSC or MICR codes that they need:

Using the NEFT and RTGS services provided by Kotak Mahindra Bank is easy, convenient and completely safe. The use of IFSC codes has made this possible. Customers from any Kotak Mahindra Bank branch can transfer money to a beneficiary who has an account in any bank as long as the receiving bank’s branch is NEFT or RTGS enabled.

Debiting will be done online. As long as the request is received before 6.00 pm on weekdays (Monday to Friday) and before 12 pm on Saturdays (unless it is a bank holiday. Check out the official website for the complete list of non-working Saturdays), it will be sent to RBI in the respective clearing cycles. The time taken by the Beneficiary's Bank to process the payment will decide the time taken to credit the Beneficiary's account.

You will need the following information to use NEFT service at Kotak Mahindra Bank:

The charges for NEFT transactions are:

These are the charges if the customer holds any kind of savings account from Kotak Mahindra, unless they hold an Ace Account, in which case all transactions will be free of charge.

RTGS (Real Time Gross Settlement) is another fast and extremely safe method of fund transfer which is reserved for transactions of high monetary value. The minimum amount for an RTGS transaction is Rs. 2 lakh. It is possible to transfer funds to a beneficiary who has an account in any bank in India as long as the beneficiary's bank is RTGS enabled.

Debiting will be done online. As long as the request is received before 4.00 pm on weekdays (Monday to Friday) and before 12 pm on Saturdays (unless it is a bank holiday. Check out the official website for the complete list of non-working Saturdays), your request will be processed on the same day. If request is received after cut-off time or on holidays, it will be processed on the next RTGS business day. The amount will be debited from your account only when the request is processed, subject to availability of clear funds.

You will need the following information to use RTGS service at Kotak Mahindra Bank:

The charges for RTGS transactions are:

Headquartered in Mumbai, Kotak Mahindra Bank is the fourth largest Indian private sector bank by market capitalization in the country. It was established in 1985 and created history by being the first bank in India to have been converted from a company to a bank. The bank has over 641 branches and over 1,159 ATMs spread across 363 locations in India. Kotak Mahindra Bank also provides various other financial products to their customers such as deposit accounts, loans, investment services, business banking solutions, treasury and fixed income products among others.