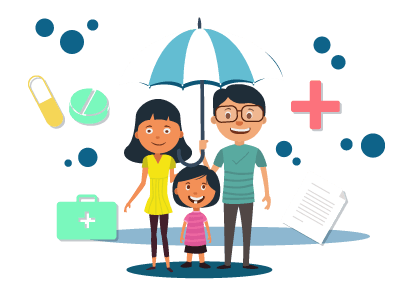 Example of how these plans work:

Anyone who has ever taken an insurance policy would know that the insurer sometimes asks you to submit a medical report as proof of good health and insurability. This is done by the insurer to ensure that the applicant is not suffering from any serious or critical illness which may be life threatening, which in turn drives up the risk factor greatly. However, not every insurer offering a term plans would require you to submit a medical report for the purpose of applying and purchasing an insurance policy.

If you are looking to purchase a term insurance plan but do not want to undergo a medical check-up for the same, you will have to get in touch with an insurer who doesn’t have this requirement. To make your task easier, we have curated a list and details about some such insurers which do not ask you to submit a medical report to purchase a term insurance policy. Read on to find out who these insurers are, which term policies they offer and how you can apply for these policies.

Term Insurance With Riders In India

In India, term insurance is easily one of the most popular type of insurance which is preferred by hundreds of people. The essence of term insurance is to provide risk protection in the case of death wherein a death benefit is paid to the nominee of the policyholder.

However, in a time when competition is high, more and more insurers are launching term plans which come with a range of add-on riders that can be attached to the base plan to enhance it’s coverage. So, if you are looking to get a term plan with additional coverage, term plans with riders are your go-to solution. Here, we talk about some of the top term plans which include riders, the types of riders that you can opt for, and benefits provided under these riders.

When one talks of term insurance plans, maturity benefits are typically not a benefit which forms a part of such plans. Term insurance plans usually only offer a death benefit which is provided when the insured policyholder passes away before the expiry of the policy term. However, more and more people who wish to take insurance are now looking for plans which don’t just offer a death benefit but also offer returns once the plan matures or if they survive the plan.

Survival benefit is a term which is not usually associated with a term insurance plan. However, there is a sizeable chunk of people who prefer taking a term plan but do not wish to lose their money in case no death claim arises. For this reason, many insurers are now introducing term plans which also offer a survival benefit in addition to a death benefit.

1. Q) What is the grace period of the policy?
A) Grace period for SBI term insurance plans are 30 days for half yearly, yearly and quarterly premium payment terms and 15 days for monthly premium payment terms. Payments missed after grace period will lead to the policy being lapsed. Lapsed policies can be revived provided the application for revival is within 3 years from the date of last missed premium and all arrears are paid.

4. Q) What are the exclusions for coverage of riders?
A) The riders will not cover any eventualities caused due to high risk sports and other high risk activities, Disasters such as nuclear contamination, criminal activities, drug abuse and self-inflicted injuries

This Insurance Company has not partnered with BankBazaar.com. For more details, please visit its website/branch office. The trademarks, logos and other subject matters of intellectual property belong to their respective owners.

GST of 18% is applicable on life insurance effective from the 1st of July, 2017