Karnataka is one of the renowned south Indian states. Bangalore, the silicon valley of India, is the capital and largest city of the state with a huge network of IT and Non-IT companies. The state is the seventh biggest by region and eighth biggest by population. The real estate industry has always been booming in the state, attracting domestic and NRI investments.

Trend of Petrol Price in Karnataka for January 2020 (rates per litre):

Trend of Petrol Price in Karnataka for December 2019 (rates per litre):

Trend of Petrol Price in Karnataka for October 2019 (rates per litre) :

Trend of Petrol Price in Karnataka for August 2019 (rates per /litre ):

Trend of Petrol Price in Karnataka for June 2019 (rates per litre):

Trends in Petrol Prices in Karnataka

Petrol rates in Karnataka in the last three years have changed often. The change can be attributed to many reasons. Let’s consider the trend in petrol prices in Bangalore, the capital city of Karnataka, over the last five months. Petrol prices are moving in an upward direction in the capital and other major cities including Belgaum, Mysore, Davangere, Hubli.

The petrol cost per litre in Bangalore has accelerated by 3.33% for July and by 5.47% for August of the current fiscal year. Both May and June 2017 had a decreasing trend. Prices were constant throughout April 2017. The lowest rate recorded since April 2017 is Rs.64.21.

Petrol Prices in Karnataka vs. Other States

It is quite interesting to note that both diesel and petrol rates have slashed soon after the implementation of GST, which is completely a new, streamlined taxation platform. With effect from 1st July 2017, Karnataka is the first south Indian state to offer lower prices for diesel and petrol. Fuel rates have fallen by Rs.3.00 per litre.

As on 1st July 2017, the lowest price for diesel was recorded at Rs.53.65 a litre while in Bangalore it was Rs.54.23 a litre. Interestingly, petrol and diesel rates per litre in other states such as Delhi, Maharashtra, and Uttar Pradesh were comparatively high on the similar date.

Quarterly Petrol Price Trend in Karnataka Between January and March 2019

Quarterly Petrol Price Trend in Karnataka Between October and December 2018

Petrol Price Trend in Karnataka Between October and December 2018

Quarterly Petrol Price Trend in Karnataka between July and September 2018

Quarterly Petrol Price Trend in Karnataka Between April and June 2018

Petrol Price Trend in Karnataka in May 2018

Trend in Petrol Price in Karnataka between January and March 2018 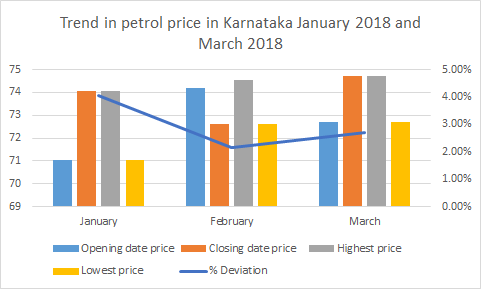 Trend in Petrol Rate in Karnataka in January 2018

Trend in Petrol Price in Karnataka in February 2018

Trend in Petrol Price in Karnataka in March 2018

How are Petrol Rates in Karnataka Computed?

Petrol is priced based on a few considerations such as the cost of unrefined oil, which is traded in the USD; the refinery transfer price, which is the price paid by oil marketing companies to refineries; the central excise duty, which is fixed across the nation; the state VAT, which is the VAT imposed on petrol by the Karnataka government; and finally the dealer’s commission, which is the commission charged by retail petrol stations. The retail selling price of petrol in Karnataka includes all these cost elements. If any of these elements varies, the RSP will be adjusted accordingly.

How Frequently are Petrol Prices in Karnataka Updated?

Earlier, fuel price revision used to happen on the first and sixteenth of each month. Fuel rates used to be constant at least for a period of fifteen days. Currently, we have a new fuel pricing system called dynamic fuel pricing or daily revision of fuel prices in all cities of Karnataka.

The new system revises fuel prices on a daily basis based on two important factors:

Indigenous production of crude oil in India is just 25% of the country’ oil requirements and the rest 75% is sufficed through importing. However, variations in crude oil prices and the currency conversion rate should be reflected in the selling price of fuels. The new system is transparent, perfect. Tracking information is easy for consumers as the biggest oil brands such as Indian Oil, HP, BP, and Shell have designed some means to get the latest information. Daily revision of petrol rates is a good proposal for many reasons. Firstly, it enables customers to absorb regular petrol price variations in Karnataka by a little margin. In case of fortnightly-based revision, there used to be big variations.

Impact of GST on Petrol Prices in Karnataka

The highest rate fixed by the GST council till today is 28%. Even if 28% GST tax bracket was imposed on petrol, the revenues for the government would have adversely been affected. A few experts are of the opinion that GST can also be imposed on petrol, diesel, and petroleum products. In fact, the issue was debated in the recent past.

Petrol vs. Diesel Rates in Karnataka

In a nutshell, Karnataka is one of the south Indian states to charge petrol and diesel quite reasonably. The recent cut in entry taxes is the primary highlight in Karnataka. Diesel and petrol prices are envisioned to be steady over the next few months unless there are major changes in overseas crude oil.

Also Check Petrol Price in NearBy Cities of Karnataka

News About Petrol Price In Karnataka