Trend of Petrol Price in Nagpur for January 2020 (rates per litre):

Trend of Petrol Price in Nagpur for December 2019 (rates per litre):

Trend of Petrol Price in Nagpur for November 2019 (rates per litre):

Trend of Petrol Price in Nagpur for October 2019 (rates per litre):

Trend of Petrol Price in Nagpur for September 2019 (rates per /litre ): 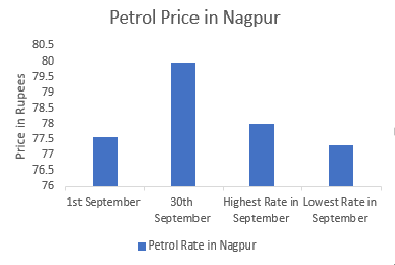 Trend of Petrol Price in Nagpur for August 2019 (rates per /litre ):

This page gives you a detailed analysis of petrol prices in Nagpur, which is the third biggest city in Maharashtra and after Mumbai and Pune. The price paid by consumers is called the retail selling price (RSP). It includes the local tax levied by the government of Maharashtra and the central excise duty levied by the central government. In October 2017, the excise duty on petrol was reduced by Rs.2 per litre and the state VAT by Rs.2 per litre.

What is the Trend in Petrol Prices in Nagpur?

Cost of crude oil has been growing. The INR/USD exchange rate is highly volatile. The variations in these two price determinants are replicated in the RSP of petrol, which is revised every day. In Nagpur, the RSP has been increasing marginally as a result of growing crude oil rates. Fuel prices including petrol and diesel are expected to go up slightly in the city. Consumers should check the current petrol price in Nagpur before fueling their vehicles. Let’s now look at the historical prices.

State Levies on Petrol – A Comparison

The local tax on petrol was 47.94% in Mumbai, Navi Mumbai and Thane. It was 46.81% in rest of the rest as per the data published by Petroleum Planning and Analysis Cell on 04 October 2017. The petrol price in Nagpur is less compared to Mumbai and Thane. The local tax levied on petrol by the government of Maharashtra was the highest among all Indian states. This is the reason why petrol prices in all cities in Maharashtra including Nagpur were high.

How is the Price Revision of Petrol done in Nagpur?

This section is extremely important from the viewpoint of petrol consumers in Nagpur. Currently, the petrol price revision is done on a daily basis. The daily revision is called dynamic fuel pricing. All oil marketing entities including Hindustan Petroleum, Bharat Petroleum, Indian Oil and Shell Oil have adopted the dynamic fuel pricing mechanism to review the price of both petrol and diesel. This new system came into effect on 16 June 2017 in India.

Therefore, all petrol stations in Nagpur will revise the fuel price every day at 06:00 a.m. The revised fuel price will be uploaded to the websites of oil marketing companies for the public to refer. Earlier, fuel rates used to be reviewed on the first and sixteenth of every month. Under the new system, the fluctuations in crude oil prices and the currency exchange rate are quickly replicated in the price charged to end customers.

How do I Check the Current Petrol Price in Nagpur?

Tracing the current petrol rate in Nagpur is not difficult since all oil marketing companies have created customised mobile applications. It is extremely useful for smartphone users who can download these mobile applications to trace the latest fuel price. Alternatively, consumers can request for the fuel price by sending text messages. They can also dial the customer care help desk and visit the websites of OMCs.

How are Petrol Prices Computed?

The retail selling price of petrol is computed by adding the following factors:

Taxes: Taxes account for more than 50% of the final price paid by consumers. Taxes are subject to vary from time to time. The local tax imposed by the government of Maharashtra as on 04 October 2017 was 46.81% in Nagpur and the excise duty on petrol was Rs.19.48 per litre. Both the central and state levies have recently been revised in October 2017.

In addition to the aforementioned cost elements, the retail selling price also comprises of dealer commission and pollution cess.

Which factors do affect Petrol Rates in Nagpur?

GST and Petrol Prices in Nagpur

The Goods and Services Tax is a comprehensive tax platform introduced in India in July 2017. All types of commodities and services will fall under the purview of GST. They are taxed currently at 5%, 12%, 18% and 28%. GST is not applicable to petrol and diesel. Bringing these two fuels under the purview of GST will bring down the revenue source for the government. Till date, petrol prices in Nagpur remain unaffected.

Also Check Petrol Price in NearBy Cities of Nagpur

News about Petrol Price In Nagpur