Locate any details of Vijaya Bank branch in India. 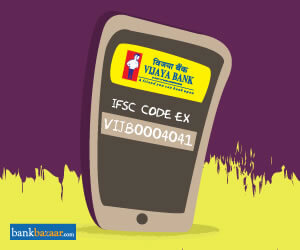 It is a 11-digit code that consists of 3 components and is made of 11-digits. Indian Financial System Code or IFSC code is an alphanumeric code that is mainly used for money transfer transactions using IMPS, NEFT and RTGS. The Reserve Bank of India (RBI) gives out these codes to all the banks across the country. This key is unique from branch to branch and never will two bank branches have the same IFSC code. For example, the Vijaya Bank IFSC code is ‘VIJB0001544’ for the Attibele branch in Karnataka. In this case, the first four alphabets ‘VIJB’ is representative of the bank name and the following digit, which is ‘zero’, is always kept aside for future use. The branch is the specifically recognised through the last six digits of the 11-digit key, which is ‘001544’, and denotes the Attibele branch. On the other hand the IFSC code for the Ulsoor branch in Bangalore is VIJB0001216.

How to search VIjaya Bank IFSC Code and MICR Code

IFSC code or Magnetic Ink Character Recognition (MICR) code is printed on the cheque leaf that is issued by the bank. These codes can also be found on the respective bank website. Also, there are a number of third-party financial websites from which the information can be obtained.

BankBazaar is one such platform through which you can get the IFSC code of any bank at the click of a button. Use the IFSC code finder tool on the IFSC mian page to find all IFSC codes. To do this:

Vijaya Bank has made it convenient for its customers to transfer money in a quick and secure fashion with the help of NEFT and RTGS services . Both these services make use of IFSC codes to transfer money from one account to the other, be it to another Vijaya Bank account or to an account with any other bank.

NEFT or National Electronic Funds Transfer is an online electronic payment service provided by the RBI. Vijaya Bank offers the service to its customers who wish to make fast and secure payments, not only to other Vijaya Bank account holders but also to accounts of other banks. NEFT transfers are done on an hourly basis with 11 hourly batches on weekdays and 5 hourly batches on Saturdays. The timings for these batches are between 9.00 AM to 7 PM on weekdays & between 9 AM to 1 PM on Saturdays. There is no minimum or maximum limit for NEFT transactions but these can only be done by persons holding an account with Vijaya Bank. Noncustomers of the bank are not allowed to make NET transactions. In order to carry out an NEFT transaction, customers must provide details like the beneficiary’s name, account number, address, bank name, branch and IFSC code of the branch to which money needs to be remitted.

The charges for NEFT transactions are:

Established in the year 1931 in Mangalore, Vijaya Bank is one of the leading nationalized banks operating in India. Since its inception, the bank has grown steadily and boasts of a network of over 1600 branches, 27 regional offices, 42 extension counters and over 1500 ATMs. In order to offer banking solutions which are technologically advanced, the bank has adopted Financial from Infosys as its Centralized Banking Solution. The bank offers a slew of well-appointed financial products and services like merchant banking, credit cards, leasing, hire purchase and electronic remittance services.

Other Products from Vijaya Bank
Other Popular Banks IFSC Code: