The Indian Passport is issued by the Ministry of External Affairs, Government of India, through a network of 37 passport offices across the country and the 180 Indian embassies and consulates located abroad. The document serves as an essential travel document for individuals who travel abroad for education, tourism, pilgrimage, medical attendance, business purposes and family visits. The passport certifies the holders as citizens of India by birth or naturalization as per the Passports Act, 1967.

In India, the Consular, Passport and Visa Division of the Ministry of External Affairs, Government of India provides passport services through Central Passport Organization (CPO) and its network of passport offices, and Passport Seva Kendras(PSKs). Non-resident Indians (NRIs) can avail passport and other miscellaneous services through the 185 Indian missions or posts. It needs to be mentioned that the passports issued to individuals are machine-readable, as per the guidelines laid down by the Indian Civil Aviation Organization (ICAO). 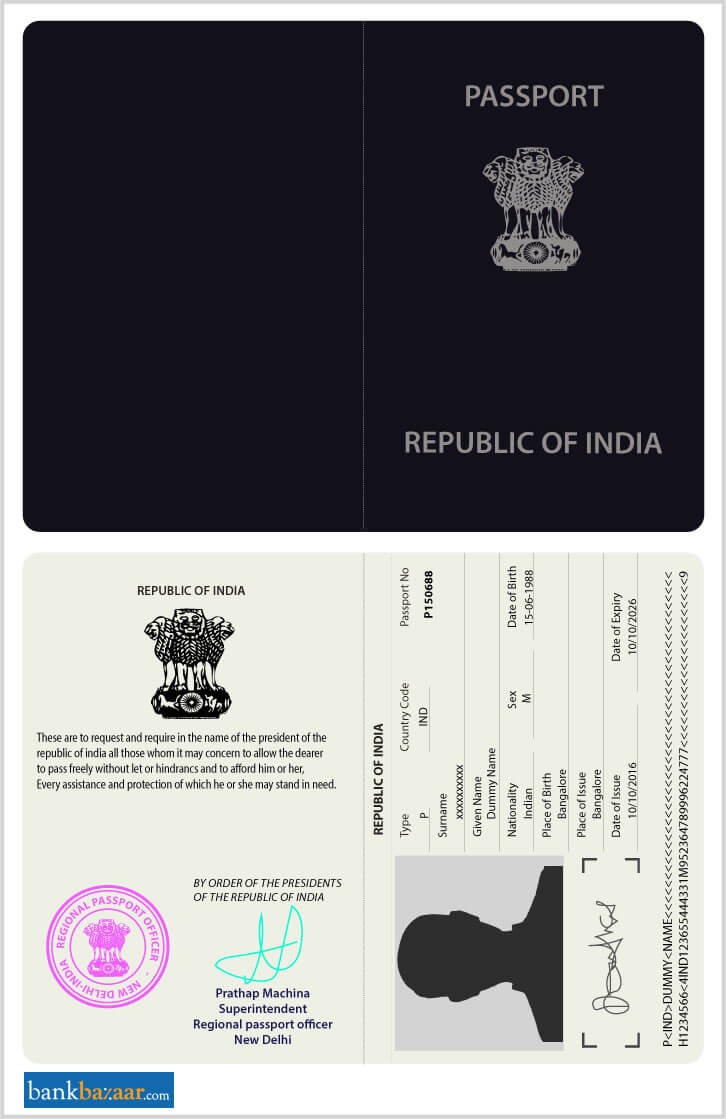 Types of Passport issued in India

There are two main types of passports that are issued to individuals by the Ministry of External Affairs, Government of India. They are:

How to Apply for an Indian Passport

To apply for an Indian passport offline, applicants need to download and get a printout of the application form before submitting them at the passport collection centers. Another alternative is to buy the application form, fill it up and submit it at the center along with the relevant documents.

When an individual applies for a passport, he/she is required to submit certain documents:

1. For Proof of Address

2. For Proof of Date of Birth:

How to Book Appointment for Indian Passport

Documents Required for Out of Turn passports

1. If the applicant 18 years and above can submit any two of the mentioned below documents:

2. If the applicant is below 18 years, he/she needs to submit any one of the documents that are mentioned below:

As mentioned earlier, the Ministry of External Affairs works through the Central Passport Organization (CPO) and its network of Passport Offices, Passport Seva Kendras (PSKs) in the country and through embassies and consulates outside India for the issuance of passports and other passport-related services.

1. How to check the Indian Passport Application Status?

It needs to be mentioned that once the application is filed it goes through various stages like under review, printed, dispatched etc. Tracking the status shows which stage of the process the passport application is in.

3. How does the processing of Indian Passport Applications at Passport Seva Kendras works?

4. How To Check ECR/ECNR Passport Status?

The ECR and ECNR denotes whether the passport holder needs emigration clearance for travelling to the specific 18 countries listed by the Government of India. The information regarding the status of ECR/ECNR is provided on the second page of the passport.

5. How To Change The Address in the Indian Passport Application Form?

The passport holder can update the address by applying for a re-issue of the passport. The person can do it online or offline according to their convenience.

6. How can Government Employees Apply For an Indian Passport?

The individual has to first send ‘Prior Intimation ‘(PI) letter to the controlling authority before applying for the passport. This is required to be done to speed up the whole application process. The rest of the process is mostly similar to the process followed by ordinary citizens of the country.

7. How many days does it take to get an Indian Passport?

8. What are Type P Passport in India?

Type P passports are regular passports which are issued to ordinary citizens of the country. The passport can be used to travel to foreign countries for personal trips, business trips, educational purposes, etc. In Type P passports, ‘P’ stands for ‘personal’.

9. Is having a permanent address necessary while applying for an Indian passport?

Having a permanent address is not mandatory while applying for an Indian passport. However, the applicant needs to provide the current address which will be endorsed in the issued passport.

The Diplomatic passport which is issued to Indian diplomats, top-ranked government officials and diplomatic couriers is known as a ‘Red Passport’ in the country. The passport has a maroon cover and is also known as ‘Type D’ passport.

11. Which is the passport issuing authority in India?

The passport issuing authority in the country is the concerned Regional Passport Office(RPO) where all the important decisions with regards to the passport are taken.

12. What is the validity of the Indian passport?

The Indian passport which is issued to the ordinary residents of the country is valid for a period of 10 years. For a minor, the validity is restricted to a maximum of 5 years.

About Passport
Types of Passport
Others Info